(This article was originally published in avegabondslife.com)

If I asked you to guess what the hardest part of doing a yoga teacher training (YTT) is, I’m guessing you’d probably say something like ‘getting into _____ (insert really hard pose here)’, or ‘learning the names of all the *asanas in sankrit’ (although, yes, that is pretty hard!). But, for me, the biggest obstacle I had to overcome in completing my YTT was feeling like I wasn’t good enough at yoga to be able to teach it. In other words, that ol’ buddy: self-doubt.

Though I had been doing yoga seriously (by that I mean at least 3 times a week) for about a year, I suspected before starting the training that I would probably be the ‘worst’ in class, being neither very flexible nor very strong, so not being able to do many of the harder asanas. Though I had prepared myself for that, still… I couldn’t help looking around at my fellow classmates and feeling like I didn’t belong. Lying there in Bridge pose in a *shala full of Wheels, I couldn’t help but feel slightly ashamed, unworthy, even.

I knew this feeling well – in academia we call it ‘imposer syndrome’, a well-documented phenomenon, where you spend most of your time wondering at what point they’ll tell you ‘sorry, there was a mix-up, we meant to offer the position to someone else’, because there was no way you were smart enough/deserved to be there. And so you spend your entire career a nervous wreck, constantly looking over your shoulder, hiding in the shadows. But I had thought I was leaving that all behind me…

Yet, I also knew that yoga was about more than the physical practice, the asanas.

I had been interested in the spiritual and philosophical side of yoga for many years, but looked at most yogis and thought: ‘I don’t look like that!’ (i.e. skinny, flexible), ‘there’s no way I can get into that crazy pose!’ As a result, my relationship with the physical side of yoga was a lot like my first relationship: on-again-off-again, never quite certain that I wanted to commit. Like most of the best things in life though, yoga appeared again just when I needed it most, in the form of an inspiring teacher, and suddenly something shifted and I was hooked. Fast-forward two years and I found myself lying there in Bridge, wondering if I hadn’t made a huge mistake…

As it turns out, I wasn’t the only one feeling that way. Though, to me, everyone else was so good (‘so what could they possibly have to worry about?!’) we each had different poses we struggled with. And, in fact, it doesn’t actually matter how good or talented or flexible you are. Self-doubt makes us blinds to our strengths. It will find the one tiny flaw, the thing that might not be ‘perfect’ about us, and amplifies it.

Luckily for my fellow yogis and I, we had found ourselves in the hands of some extremely compassionate and sensitive teachers who, aware of our worries, emphasised that yoga was not just about the asanas (as I had hoped), and that you don’t necessarily need to be able to do a pose perfectly in order to teach it – as long as you know how it should be done. 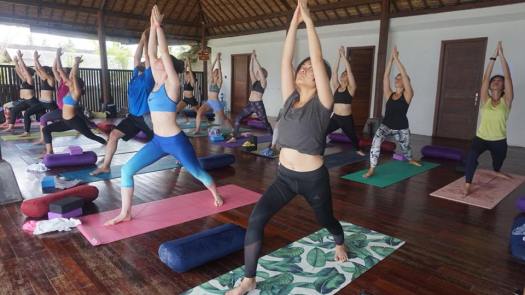 But Self-doubt is a persistent little troll; he likes to creep up on you in the silence, just when you think you’re rid of him. ‘Seriously though, who would want you as a teacher’ he sneered, ‘when you can’t even do all the poses?!’

So how do you kick Self-doubt’s butt? Well, for me it was about accepting my weaknesses, wholeheartedly, and loving myself anyway. By being compassionate and patient with myself. By focussing on my strengths as a teacher: my compassion, my confidence, my understanding of philosophy, meditation, and, yes, asanas.

In fact, I now come to see this as one of my greatest strengths as a teacher. I understand my students’ struggles because I’ve been there – I’m still going through them myself. I can more easily put myself in their shoes; I get it.

I’m sure I’m not the only one who was put off trying yoga after equating it with that image (e.g. the stick-thin yogi with one leg stuck behind their head). If that’s all we see then we might think, ‘well that’s not me, I don’t look like that, so yoga must not be for me then’. Having a teacher like that might also be very intimidating for lots of people. Not to say we shouldn’t aspire to that (the pose, of course, not being stick-thin), although some people will never have that level of flexibility and that’s ok too! And if you can stick your leg behind your head, then, good for you! But yoga is so much more than that. Yoga is truly for every body.

Maybe for some people, yoga is just breathing deeply, consciously. Maybe for someone else, it’s noticing that they feel less stiff today than they did yesterday. It’s about celebrating the small wins. Today I could lift my head one inch off the floor in Wheel. That’s a huge achievement for me!

It’s about being kind and patient with ourselves. Most of all, it’s about not comparing ourselves to others, only comparing ourselves to how we were yesterday, and the day before, and maybe even to how we want to be in the future, to our best version of ourselves. (But at the same time, not being too hard if we don’t change as quickly as we might like. Progress takes time, and only given the right ingredients: patience and kind words.)

Of course, Self-doubt still shows his ugly face sometimes. But we must never let him stop us from doing what we love, even if it doesn’t work out the way we planned. Drown out his voice with love and compassion. You won’t regret it. I know I haven’t.

*shala = the yoga deck, or studio

What I write about